After landing our kayaks at Kalalau Beach, we quickly set up camp so that we could have the afternoon to further explore Kalalau Valley. The last time I was here in 2011, we did not have time to make it back to Waimakemake Falls and Big Pools. Fortunately with some better planning, we were successfully able to get to both, and still make it back to Kalalau Beach for it’s notorious sunset, a gluttonous dinner and drinks under the milky way.

Like the last time, we started at the trailhead for the “valley trail…” however, after about 15 minutes into the hike we took a different trail that did not hug the main stream fork in the valley.

After gaining some elevation,

and a few stream crossings,

we encountered a ~25 foot waterfall alongside the faint trail.

We all knew that there was a larger waterfall higher up, as we could see several tiers from when we hiked Kalepa Ridge above us in Kokee. So we contoured around the falls and found a way to get up to the next level.

Which paid off since we got to see this 100ft(+) spectacle. We took turns cooling off under the narrow, but intense flow of water coming down the sheer wall. Afterwards, we backtracked to find the trail junction to get to the “big pools,” instead of spending time trying to get to any higher tiers of Waimakemake… which would likely take a lot of route-finding and be physically demanding.

When we got to “Big Pool,” I was astonished how many people were there. There’s a lot of space in Kalalau Valley and at the beach… but only 60 permits are allotted by the Department of Land and Natural Resources (DLNR) per day. There must have been about 20 people just in this one, small area. sigh… I’ll elaborate about this later.**

Anyhow, we hiked further upstream to a quieter, shaded area.

We all had to take a well deserved break, after already seemed like a long day, and cool off in the deep pool. After about 45 minutes here, it was time to head out the valley and back towards the coast. 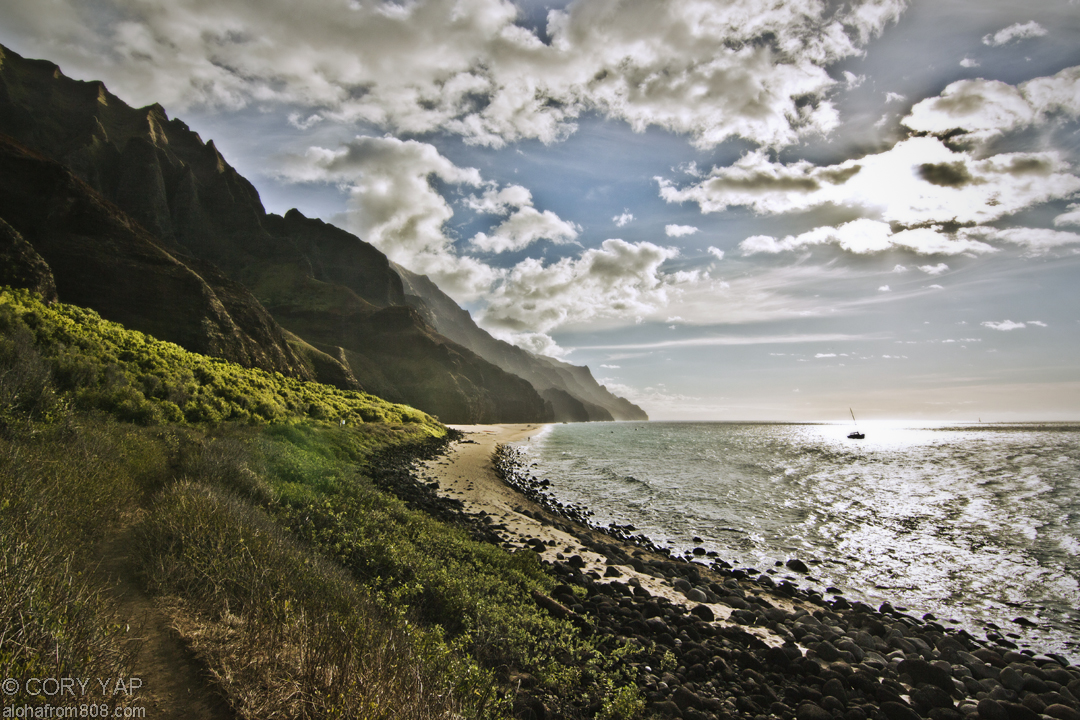 The hike out was much quicker than I had anticipated, we had quite a bit of time before sunset.

So I started up a campfire and cooked up a few pounds of New York steaks and garlic mash for the crew.

While letting the steak rest, I joined everyone on the beach for some celebratory drinks of an epic day and an epic sunset.

After dinner, we came back down to the beach to stargaze and relax our fatigued bodies. I don’t usually take “the above” types of photos, but Amanda and Will are getting married in a couple weeks… haha. Congrats to two of the coolest people I know!!! What a adventure packed day with the most adventure-worthy crew. Again, mahalo nui loa to you all for making this a trip one that I will remember for the rest of my life.

**Personally, I come here to get away from crowds and the urbanized world, and have to frown upon people who do not feel similarly. Not to point out anyone in particular since I don’t really know who does and doesn’t have a permit here, just in general for everyone. If there were no restrictions on how many or how long people could camp here, I can’t even imagine how many people would just be here permanently… which is somewhat the case. Not a huge fan of people who boat in either; I even saw a few zodiacs dock on the beach with all kinds of stuff loaded in them. Many of them bring excessive luxuries, like large ice coolers, tables and chairs. I already feel privileged to bring a few more items while kayaking than I would backpacking. I mean, if you need to boat in everyone and everything from home to such a remote place to feel comfortable, you might as well just hang out at an accessible beach park with a parking lot. To verify, I don’t mind people coming to Kalalau, but respect the rules and the land so that everyone gets to have the same surreal experience while visiting here. It’s not that expensive for what you get out of it, and it’s not hard to book permits online. I’m glad I heard of a couple different incidents in the past couple months where people were cited/fined for camping without permits… at least there is some enforcement by the State to regulate the regulations, unlike so many other areas where they are lacking enforcement. I heard the fine was $500 for at least one of the people, but I don’t know any facts.

Also PLEASE PACK OUT WHAT YOU PACK IN… I was sad to see unwanted gear left at campsites on this trip, where campers always believe someone else can use their 1/2 empty fuel containers, etc, or are just too lazy to pack out their crap. One guy even offered me a “large” hibachi / grill that he didn’t want. He was confused why I refused “what he though was a favor,” but after explaining to him that I didn’t want to pack it out, he responded back to me, “just leave it, someone else will use it.” I told him “no, you should pack it out since you brought it.” Unfortunately, I saw it left on the beach later in the day. F*ckin brutal. smh.

I’ve ranted about this long enough, and it applies for both campgrounds and Kalalau and Milolii (next couple of write ups). If you’ve made it this far, thanks for sticking it out and reading til the end…

For more information about backpacking to Kalalau, see my write-ups from our last trip here in 2011. Mahalo nui for visiting and supporting my site. Aloha no…

I agree 100% I was fortunate enough to be there this summer and got the permits as required, also practicing pack in/ pack out. After dreaming about the Kalalau for months to get there and see it was not as isolated as I had believed. Still so amazing and special. Thanks for sharing your talent, skill and passion for Hawaii.

Glad you had a great time while there, and hope you return to explore more of the Na Pali Coast! Mahalo for visiting my site and for your praise.

Hi, I ran across your blog while looking for places to backpack with my son this fall. Couple questions if you’re still around:
Would you recommend this for a 9 year old? We live in Mammoth Lakes, Ca and are used to hiking at 8-10,000 feet elevation so we will be “conditioned.” Wondering if you could point me in the right direction. We plan to come over and spend 7 days. I definitely want to hike the Na’Pali coast, but was looking for another adventure with waterfalls and pools. This looks ideal, but I’m curious how you get to the trailhead. Do you have to kayak in?
Thanks for any and all suggestions!
Jessica

Backpacking to Kalalau usually takes a day, but others who take their time split the hike into two days. I can’t recommend going to Waimakemake falls for a 9 year old, but you could try and hike to Hanakapiai falls, which is also on the Na Pali Coast, and on the way to Kalalau:

Have fun and stay safe on the trails here! And make sure to check weather / stream conditions before you go adventuring, flash flooding is a regular thing here, and hikers often get into trouble at Hanakapiai during heavy rains.

Mahalo for checking out my site!