Yosemite National Park is one of the greatest spots in the Western US for hiking, climbing, backpacking / camping, or even just site-seeing. Barely remembering Yosemite as a kid, it was imperative that I returned to the national park to redeem my lack of memories there during my Fall 2011 stay in California.

Though many of the trees are evergreen, Yosemite in the fall still has quite a few perennial trees…

Reds, oranges and yellows, from the ground to the sky give you a sense of aesthetic warmness… which is exactly the opposite of the air temperature, which was usually in the mid-high 50s in the day but dropped below freezing at night.

Most people plan their Yosemite camping trips months in advance, as most campsites are competitive for space / permits, particularly in from spring to early fall. However, since we (Luke and I) drove up from LA in late fall, we were able to find a campsite at Camp 4 (35 walk-in campsites) fairly easily (left). In the late fall, there isn’t always a ranger at the kiosk, so you will have to check yourself in (instructions for campsites and parking are on the window). Though before checking in, the first thing you must read is about bear encounters and attacks (right)…

It is critical that you store food in the provided lockers at each campsite, as the bears have figured out how to open / procure every other anti-bear method to secure food. It is important to not leave ANY food or food-like items (toothpaste, gum, ketchup packets, etc) in your vehicle, as photos of bears breaking/entering cars were posted as well.

The campsites themselves are fairly spacious, where there will be no more than 6 people per campsite. During this time of year, there should not be more than one party at the same campsite. Each campsite come with a fire-pit and a picnic bench.

Mind that you should take off your rain-fly to dry in the morning, as the overnight condensation from the heat in your tent will be trapped between your tent / fly. Notice the deer verifying if the campers executed the process properly.

There are flushing toilets / sinks in each of the four heated bathrooms. There is a large wash-basin / sink to fill water and brush your teeth at… you aren’t supposed to wash dishes here, but I had seen several other campers doing so.

The nearest trash and recycling bins are somewhat far from the campsites, as bears frequent the area. All of the chutes for the bins are locked with carabiners.

As I mentioned earlier, it’s FFFFFFRrricken cold at night… and if you are camping in the fall at Yosemite, make sure to have warm/winter clothing and gear. Playing a travel guitar is extremely difficult, since you can’t leave your gloves off more more than 10 minutes before they go numb (right). 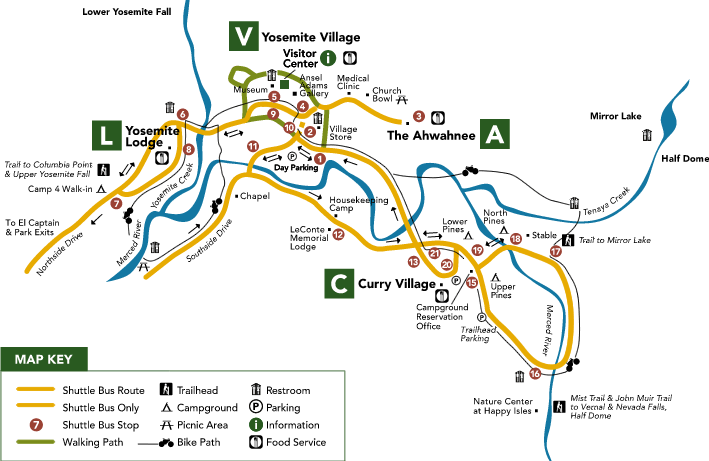 In case you forget to pack something on your camping trip… whether it being from firewood to fresh vegetables, beer to batteries, toothbrushes to toilet paper, or gloves to grabber hand warmers, almost every amenity you can think of is available at the Village Store in Yosemite Village. There’s also several restaurants near several of the campsites, but we would never ate at any of them on a camping trip… well, except on the first day we got in. 😉

Keep in mind this is a 5-part series, which includes, camping, 2 waterfalls hikes, night photography, and bouldering while in Yosemite (see links at top of page). To view this location on a Google Map also known as my “Adventure Map“, Click Here. For more mainland and off-island adventures, Click Here!!!. Thanks for stopping by!!!