Lowe Trail and Echo Mountain are well known mountain trails in Altadena, CA. For those of you who are not familiar with this city, it is just outside of Los Angeles, north of Pasadena. The first of my California adventures this year; friends Luke and Merilee (new LA residents) and I packed for a short over-nighter on Lowe Mountain.

The trailhead starts at the top of Lake Avenue, in the mountains above north Altadena. You can either take the main trail up to Echo Mountain (east “switchbacks” route), or do the more direct, steep route (west route) at the bottom of the photo.

Most of steep, west route is well-kept and wide, though there are also some areas where it is loose and shifty.

As you get higher, you start to see more and more of Altadena and can see all the way to Los Angeles.

Though the habitat seems somewhat desert-like and dry, the air was cool during this time of year… maybe in the upper 50s or lower 60s. As long as you stay dry, it’s quite pleasant to hike in.

Just past the powerlines in the previous photo, we encountered a very steeply graded part of the trail. The ground can be unstable in some places and several of the handholds are loose.

Exercise extreme caution, especially if backpacking. A heavy backpack will strongly affect one’s balance and ability to scramble up the trail.

At the top, we hit the junction to the wide, main “east-switchback” route… keep in mind that east route is much, MUCH longer… but is safer and mild graded.

From here, the views only get better and better…

…and as you increase in elevation, more forested vegetation becomes apparent. The temperature also drops considerably.

However, the amazing views wouldn’t last for long, as heavy fog rolled in… and then rain. The temperature was probably in the upper 40s at this point.

Slightly freezing, we stopped for a hot meal and hot-chocolate along the trail… as we discussed our next plan. Due to inclement weather conditions and a total misunderstanding to where we were going to camp, we ended up turning around.

We ended up taking the switchback trail down to the Echo mountain lookout, which was about 20-30 minutes from trail junction. Since this route had so many switchbacks, it put much less pressure on our knees since we were carrying (or I was carrying) heavy packs.

At Echo mountain lookout, there are several informative signs about the historical railway system and lodge. The lookout is noted by a small orange

There is also an Echo Phone, which actually works if you shout loud enough into it. If anyone was in the mountains above us they would surely hear us yelling profanities.

But the greatest thing to do there is to “look out” at the look out. The view and sunset can be pretty pleasant, as long as the weather is agreeable.

We headed down the rest of switchbacks just before sunset… However, this route takes FOREVER. Well, at least a couple hours longer than it would have taken to go down the steeper, eastern route. The steepest part of the eastern route might be pretty difficult when going down, especially when carrying heavy packs. Regardless, a great loop trail to hike or backpack / camp on. 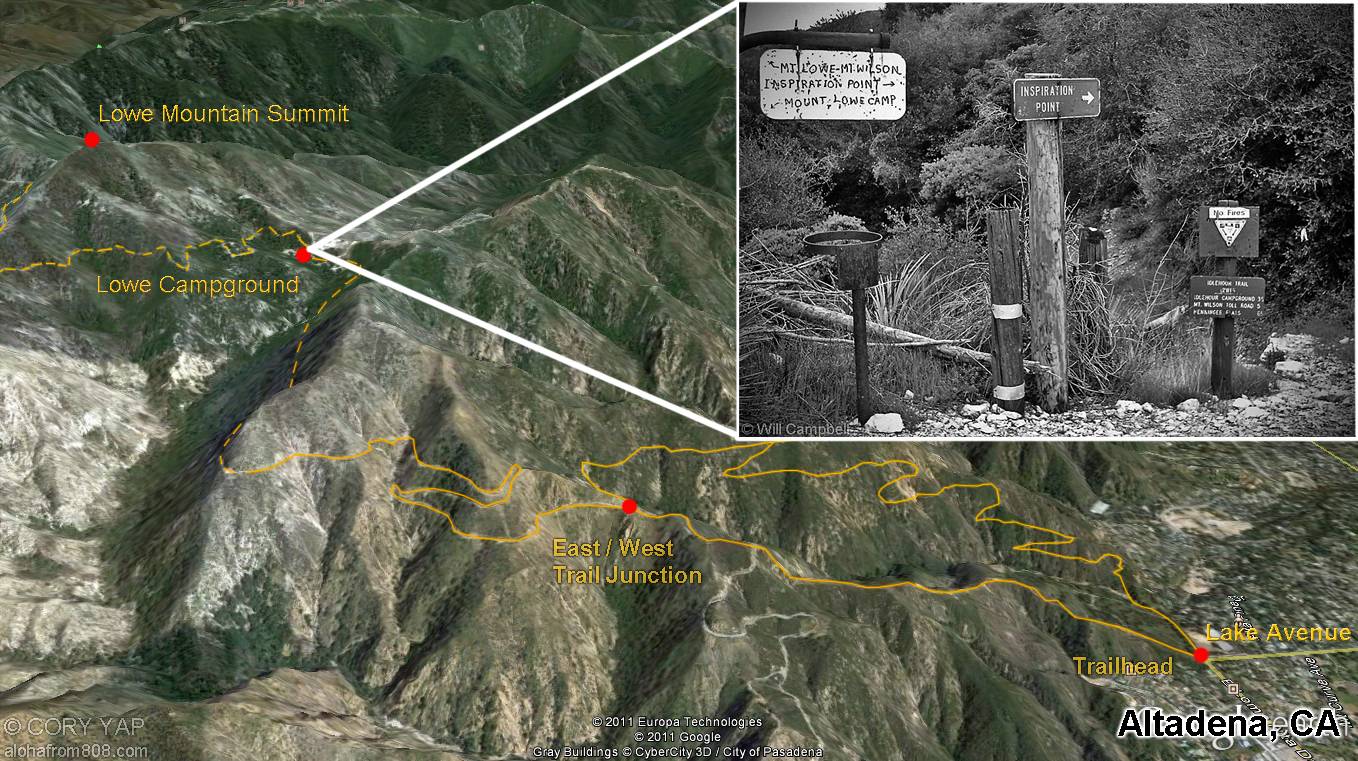 After completing the trail, I looked up where we turned around and realized we were probably less than 30 minutes from “official” campgrounds on Lowe Mountain (see start of dotted line on map). The campgrounds have a vault toilet, a hitch rail for horses, picnic tables, fire pits, and stream water (except during time of drought). Much to my disappointment, we probably could have camped there and reached the summit and got to Inspiration Point the following day. Goes to show, a good plan will go a long way… Planning late the night before / the morning of the trek is highly discouraged.

In my opinion, the east route of Echo Mountain / Lowe Railway Trail is a beginner backpacking or hiking trail… it is wide, mildly graded and well kept, and is probably only 4 miles to the campground and 5 miles to summit. The steep, west route may save you a couple hours but is much more steep… which may make it more difficult to hike on while backpacking. If you haven’t backpacked on rugged/steep terrain before or are hiking with people who haven’t, you should probably go the safer way. Happy hiking / camping!!!

To view this location on a Google Map also known as my “Adventure Map“, Click Here. To view the photo gallery for this adventure, Click Here. For more mainland and off-island adventures, Click Here!!!. Thanks for stopping by!!!

meri says: great writing, great color, great memories, fun to read, makes me want to return. luke says: think the planning was fine, the weather made the plan change though to our disappointment. next time we go when no rain. Good stuff ,

Hi, I enjoyed your post about your hike up and back down Echo Mountain, all the pix and your comments. Thanks! Incidentally, regarding what you said in a paragraph at the end, “The steep, east route may save you a couple hours,” I guess you meant to say was “The steep, west route …” Right?

LOL, yes… you are very correct, I just changed it. Thanks for visiting my site and for your kind words. Feel free to come back and visit any time!!!