The write-up isn’t that long… it’s just that I took way too many damn pictures, haha. Skip to the “Photo Gallery” if you’d like.

We began the trail at the east end of the Pali Lookout, where we ascended a steep dirt trail up onto the ridgeline. The beginning of trail was fairly well kept and shaded, though there was one patch of Hau that required us to practice our contortionist skills to pass.

Once out of the treeline, we came to a flat, open area… roughly 15-20 minutes from the trailhead/lookout. This is where the panoramic views began… which pretty much did not end for almost the entire hike.

There are several areas where we had to scramble, but none of them are very difficult or dangerous until we reached the Pali Notches… 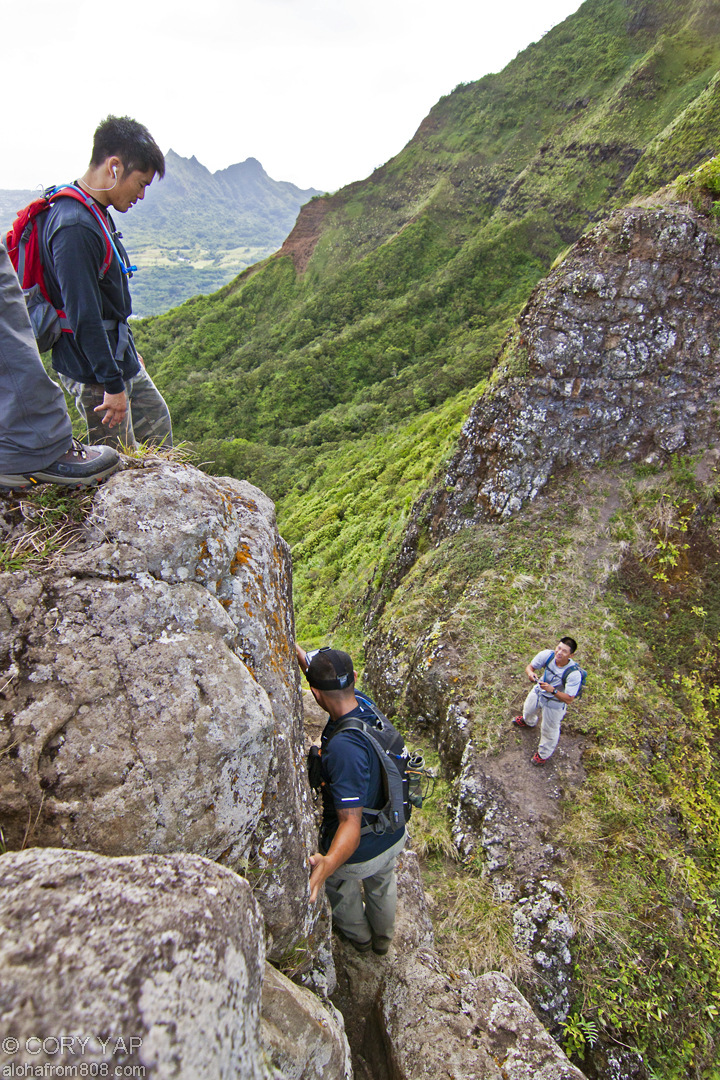 Most of us went down on the right, but traversed over to the left as we went down. Note Justin starting on the right side (left)… David traversing left and finishing (right). Climbing up out of the first notch was not very difficult (not pictured).

Descending the second notch can be a little tricky, particularly for those without much climbing experience. The hand/footholds can be loose and obscured, as there is a slight overhang… thus making the footholds somewhat blind. We had some of the more experienced climbers go first, to advise holds for others, as well as spot you in case you slip. When going down, we started on our right and traversed left, facing the wall (Click here to see David’s traverse from an earlier hike this year).

It can’t see from the angle of above photo, but Reanne is holding her hands up to spot David. She does not necessarily need to catch David, but rather direct him away from any rocks or uneven ground that may cause serious injury. The spotter may also lessen the force of the impact by holding the sides of the climber’s torso, if the climber was to fall.

Within minutes out of the second notch, we were near the base of the “Chimney…” the top of it is shown in the first photo of the write-up. I don’t know the significance of the name, but I’ve been told it may be related to the steep/narrow-ness of the rock face, and all the clouds above that appear to be coming out it like smoke. I’ve also been told it was named after the notorious, “Roger Chimney,” whose origins and significance had no explanation… lol.

Regardless of the name, some climbing and a bit of adrenaline were required for the obstacle ahead. David, Reanne and I opted to use our rock climbing shoes to climb up the chimney…

A short sequence of troy advancing up the chimney…

You’d never guess this guy was afraid of heights. haha.

We encountered several more areas where scrambling was required, but none of them as steep as the chimney itself.

As I mentioned earlier, the panoramic views did not cease as we gained elevation towards Konahuanui.

It can’t really be seen in most of the photos, but the hillsides of Konahuanui were blooming with fields of yellow ginger (left). Reanne and Troy climbing over a large boulder in the background, David and Justin posing for a picture (right).

Just before the summit of Konahuanui (K1) were some of the best panoramic views of the day, where one can see from Honolulu to Kualoa to Makapuu.

The view from the actual summit of K1 is somewhat obscured due to small trees and bushes… at least at the rest area, and was extremely muddy (left). The junction to Piliwale Ridge on Konahuanui / KST (right).

However, the view along the trail just after the “rest area,” was incredible… where you see much more of Waimanalo than in the previous panoramic photo.

Coming down from K1 to K2 (2nd highest peak of Konahuanui), the KST was slightly overgrown compared most state trails, but fairly well kept when compared to other parts of sections of the KST (left). Ridge leading down to Pauoa flats / tantalus on left and Lulumahu on right; Honolulu in the background (right).

Justin stopping to appreciate the panoramic view while hiking along KST to K2.

Once at K2, we immediately had a celebratory boddingtons toast and took a well deserved break. NOTE: Please exercise caution while consuming alcohol on hikes or any other physical activity. Alcohol can dehydrate you and affect your balance, as well as exhibit poor decision making… particularly on trail such as this one.

After 20 minutes of lounging, we continued along the KST towards Manoa Valley…

…and we started to see more and more of Honolulu as we got closer.

Again, some parts of the trail were overgrown…

…whereas other parts had fairly steep drop-offs.

Vague rumors of there being a K3 were still vague, lol (left). Continuing on towards the part of the KST nearest the center of Manoa Valley (right).

Coming down from “K3?,” there was a clearing with an AMAZING view just before reaching “Manoa Middle” Ridge. Though it seemed like we just took a break, it was definitely time to take another here…

We also stopped at the summit/junction of Manoa Middle, as “K1 – Manoa Middle” was the last segment Baron had to complete of the East Koolau Summit (left). Congrats bro, a commendable accomplishment!!! Soon after, we headed down the ridge (right)…

As a quick way to descend from the KST, Manoa Middle ridge has a medium grade and fairly wide… thanks to our vegan hiking colleagues (left). Reanne creeping her way through a bamboo grove, lol… please click to see her facial expression (right).

There weren’t many steep areas, except at the base of the ridge where you will need to descend through a thick patch of strawberry guava (left). The ridge will connects to an undisclosed point along Waiakeakua Falls Trail. The notorious concrete stairs along the Waiakeakua trail (right).

We completed the combination of trails in < 8 hours, and were ready to stuff our faces with calories of all sorts. Today, the menu would be from Honolulu Burger Company… which definitely hit the spot!

The “Pali Notches to Konahuanui” is an advanced, extreme hike; “Konahuanui to Manoa Middle” is probably a moderate/intermediate trail. For the first part: do not attempt it unless you confident with narrow ridges, steep drop-offs, loose foot and handholds, and your climbing/scrambling ability… while in the presence of high-wind gusts. The trail can be very dangerous in some areas, but getting over the mental dilemma foremost will help you through this trail. I would not recommend anyone do this trail, who have not completed similar trails in difficulty (e.g. Pali Puka to Lanihuli, Southeast Puu Ohulehule or Puu Kawiwi, etc.). Be extremely careful on this hike, and make sure to go with someone who has been on the trail prior, and/or others who are capable of hiking this type of trail. Among other necessities, you should bring 3L of water, first aid, significant length of rope/webbing, and gloves. Wearing long-sleeved shirts/pants are a must, as it is highly overgrown. Bring a lot of compact, high-energy foods as well, as you will be burning a lot of calories. DO NOT attempt in high-wind or rainy/wet conditions.

4 Comments for Pali Notches to Konahuanui and Manoa Middle – October 2, 2011

Another great post. So basically you just follow the ridge straight from K1 to K2 and then the trail to Manoa Middle is basically a straight shot? after you descend from K2? Do you end up on Alana Drive in Manoa? Thanks!

There are several ridges that come down into Manoa Valley, though I’d say “Manoa middle” is the least difficult. Don’t go down the wrong one or else you could find yourself on an extremely dangerous ridge with no trail. If you can’t find the “MM” flag to go down on KST, you should bailout on Mt. Olympus and down Kolowalu… it’s much longer, but it’s safer and can still bring you into Manoa… if this is where you are trying to end (or if you staged a car there). If you are familiar with Waiakeakua, you come out just above the bathing pool… near the first falls. From there you can either head to the Puu Pia trail junction or come out “7-bridges way” in Manoa Valley. Be careful, especially if you are going from the Pali. It is VERY dangerous. Good luck and stay safe!

Thanks for the info. I’m assuming all the ridges are marked with pink ribbons or only the middle is marked? About how long after K2 should one hit the manoa middle ridge going down? Is the ribbon very noticeable?

Not all the ridges are marked, and if so, not all of them will have labels. I think you should at least run into flags for (marked or unmarked) to get to Pauoa Flats, K3, and Manoa Middle… though it may depend on when you do it. I hear there may be a waiakeakua flag appearing soon as well. haha. I can’t remember exactly, but you should hit the MM ribbon within 60-90 minutes of the K2 marker? Might depend on how fast you/your group hikes. You might want to ask around, there are surely MUCH more knowledgeable hikers out there than myself. 😉 Again, stay safe out there…